LIFE IS TOO SHORT TO EAT BAD POPCORN! (So make your own + reasons why!)

Who wants to share a big bowl of popcorn with me? 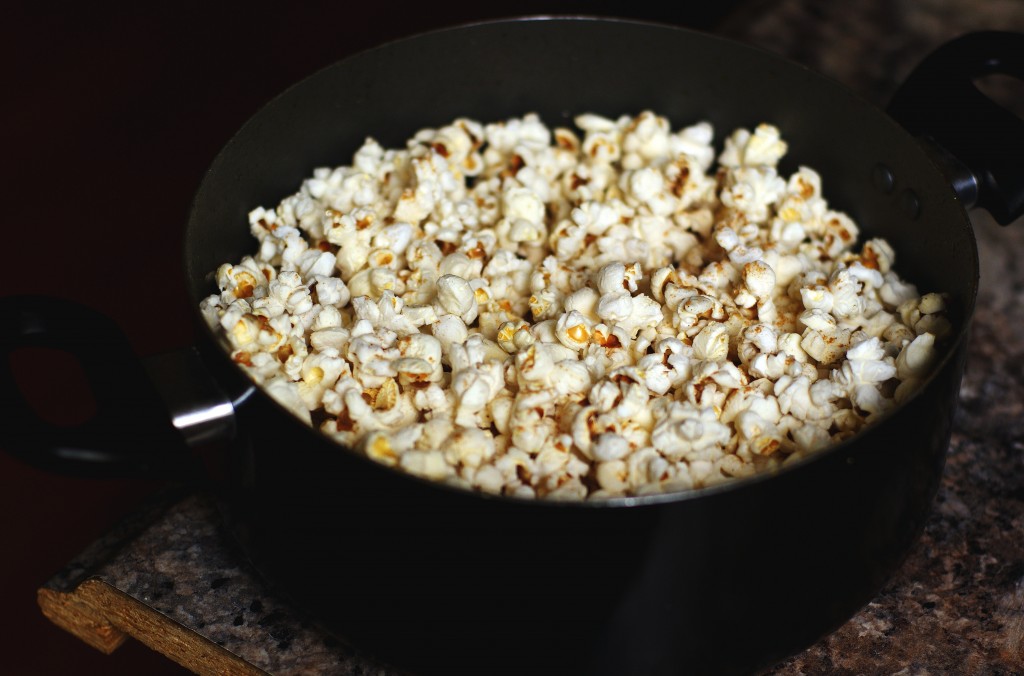 One of my favourite snacks of ALL TIME is popcorn! Alright, alright. I admit – I’m a little bit obsessed. Alright, alright – I can be ADDICTED. While I try to maintain a “in between” carb diet (this means I don’t deprive myself of carbs on a low carb diet but stick to eating only complex and low GI carbs as much as possible), popcorn has a special place in my stomach….er, I mean heart. For me, it’s a simple yet filling snack and can be relatively nutritious. Whole grain, high in fiber and anti oxidants and low in calories, it can be an ideal healthy snack option.

But not all popcorn is made healthy! Unfortunately, consuming microwave popcorn and movie theatre popcorn (sorry folks!) definitely don’t fall under the healthy snack status which we all believed them to be. Believe it or not, conventional highly processed non organic popcorn is considered to be one of the most contaminated foods with harsh pesticides and chemicals.

Corn kernels and butter aren’t the only ingredients in microwave popcorn! Ever wonder why “natural and artificial flavors” are listed on the package as so called ingredients? Because companies don’t want to tell you what chemicals they’re actually using. It’s been said that the when the bags lining (teflon coating particularly) goes through cooking process in the microwave, it causes an unwanted harmful chemical to form called perfluorooctanoic (aka PFOA). This has been identified to likely be a type of carcinogen which has been linked to cancer, cardiovascular disease, infertility and thyroid problems, and other potential health risks. And it’s not even a real ingredient!

Another issue is that it contains an artificially added chemical called diacetyl. Diacetyl is used to enhance the butter flavorings most commonly found in microwave popcorn bags. Apparently, factory workers that worked in manufacturing this product became ill from with scarring of the lungs that the condition was named ‘popcorn lung’. So inhaling a bag of popped popcorn means inhaling this additive. Plus, the labels in popcorn don’t generally include all of the many other chemicals (including diacetyl) that go into the flavorings. So the combination of the microwave (which I’ve ditched now for almost 6 years) and the chemicals in the bags, these alone make it a surprising health risk to be concerned about and definitely worth ditching.

Now what about those big bags of warm, aromatic popcorn that you can’t avoid at the movie theaters? You simply can’t watch a movie without it, right? While popcorn may seem like the snack that may be the only thing that’s not bad for you, well…..hold your butter! The calories specifically in movie theater popcorn have extremely high calorie counts. A large bag from AMC, without butter, comes at a whopping 1030 calories plus 41 grams of unnecessary trans fat! However, don’t forget, most people get butter on their popcorn, and that strange greasy liquid that vaguely tastes like butter actually contains non hydrogenated soybean oil that’s been artificially colored and flavored. Regardless if you ask for no butter, the popcorn is still coated with an artificial buttery flavoring that gives it that vibrant yellow color and heavily cooked in unhealthy trans fat like canola oil and salt. So all of the excess fat could add up and have detrimental effects on your waistline and more importantly – your health!

But it doesn’t just stop there!

To my surprise, some movie theaters apparently buy pre-popped popcorn which are warmed up under heat light lamps as a tactic to cut down equipment costs and time. This increases the theater’s productivity and in turn make more profit. Pre popcorn is also typically made in trans fat oils and flavored and colored with artificial ingredients, often containing MSG. It’s also worth questioning the unknown amount of time the popcorn have been stored for which could only mean that preservatives and additives have been added to increase shelf life.

So what’s a person to munch on while watching the latest flick? How does one avoid the “popcorn mist” and manage temptation?

The key to healthy and better popcorn is popping it yourself. I pretty much think this is the key to everything, really. It’s super easy to make and you’ll find just as delicious. Since corn is one of the most commonly genetically modified foods in the market with a wealth of health concerns, it’s best to always choose 100% whole organic popcorn kernels. Organic popping corn will be free of pesticides, additives and toxic residues commonly found in conventionally grown corn.

So with that, the more nourishing way to make your own is by air popping it in a really cool popcorn maker or using a stove top oven. What’s the best cooking oil to make it with? Organic extra virgin cold pressed coconut oil of course! And just like the popcorn, you’ll want to make your own toppings. Season it with cracked black pepper, raw extra virgin olive oil drizzle, cayenne pepper, cinnamon, a little bit of turmeric, Himalayan salt, nutritional yeast and my absolute favorite – chili powder.